The state of North Carolina has a proud heritage of Poets Laureate, including two poets closely associated with UNC Greensboro, Fred Chappell and Kathryn Stripling Byer.  So it is with special pleasure that the University Libraries and the Friends of the UNCG Libraries welcome Joseph Bathanti, who was named the new Poet Laureate on August 30, 2012.  He will appear at the Hodges Reading Room in Jackson Library at 4 p.m. on March 20.  Admission is free. 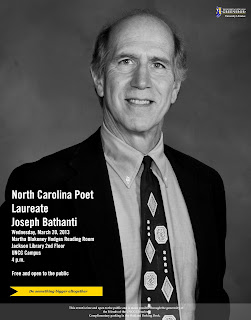 “Joseph Bathanti is an award-winning poet and novelist with a robust commitment to social causes. He first came to North Carolina to work in the VISTA program and has taught writing workshops in prisons for 35 years,” Governor Bev Perdue said in announcing the selection last fall. “As North Carolina’s new Poet Laureate he plans to work with veterans to share their stories through poetry — a valuable and generous project.”  That project dovetails nicely with the Betty Carter Women Veterans Historical Project in the University Libraries at UNCG and provides yet another reason for his March 20 visit to the campus. Bathanti previously visited the campus in November to attend the annual luncheon held to recognize the women veterans represented in the collection, and looks forward to collaborating with the UNCG Libraries as he makes visits around the state in his post as Poet Laureate.

To meet Bathanti, see this video.

Bathanti is keenly aware of the importance of the position of Poet Laureate.  Describing the importance of poetry, he begins by describing how it changed his own life.  He says he instantly fell in love with the state when he first came to the state in 1976.  Now, he says, he can’t imagine a better place to be a writer anywhere in the United States.  Crediting the state’s Visiting Artists program as a wonderful training ground for his career, he is the author of They Changed the State: The Legacy of North Carolina’s Visiting Artists, 1971-1995, published by The North Carolina Arts Council  in 2007.  He describes the Visiting Artists experience in this video:

While he now completely identifies with his adopted state of North Caroina and is passionate about it, Bathanti was born and raised in Pittsburgh, PA. He is the author of four books of poetry: Communion Partners; Anson County; The Feast of All Saints; and This Metal, which was nominated for The National Book Award. His first novel, East Liberty, winner of the Carolina Novel Award, was published in 2001. His latest novel, Coventry, won the 2006 Novello Literary Award. His collection of short stories, The High Heart, winner of the 2006 Spokane Prize, was published by Eastern Washington University Press in 2007. He is the recipient of a Literature Fellowship from the North Carolina Arts Council; The Samuel Talmadge Ragan Award, presented annually for outstanding contributions to the Fine Arts of North Carolina over an extended period; the Linda Flowers Prize; the Sherwood Anderson Award, the 2007 Barbara Mandigo Kelly Peace Poetry Prize; and others. He is Professor of Creative Writing at Appalachian State University in Boone, NC.