Spring Events in the Series "What Is College For?" 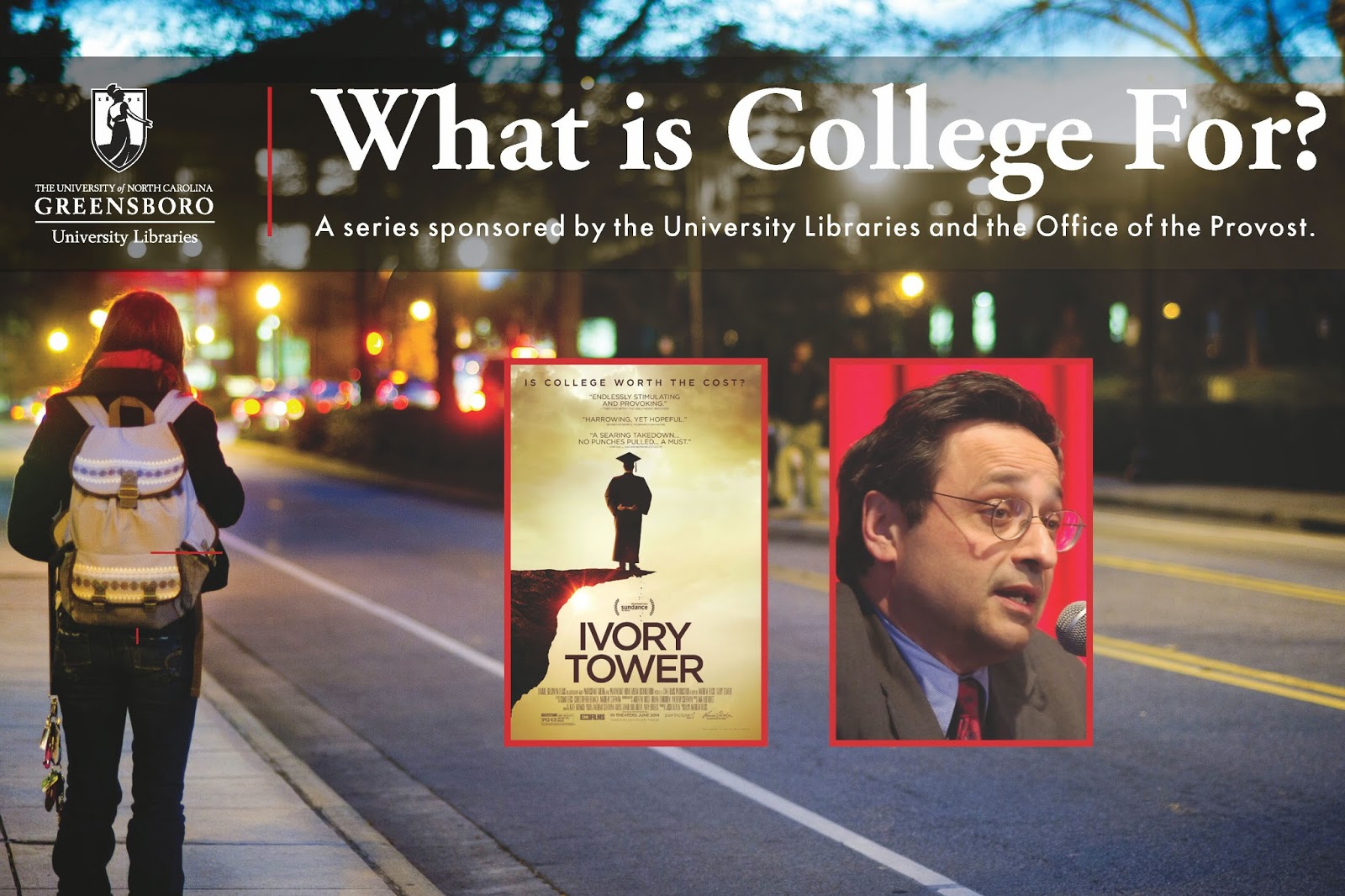 UNCG’s “What Is College For?” series continues this spring with two related events in late March and mid-April.

On March 26, the University Libraries and the Provost’s Office will host a screening and discussion of Ivory Tower, the 2014 documentary film by Andrew Rossi.  The film premiered at the Sundance Festival last year, went into theatrical release mid-year, and was broadcast by CNN in November.  There is a copy in the University Libraries DVD collection, and it is also available on NetFlix.  You can view a trailer at https://www.youtube.com/watch?v=mdOvSZDoCDc

The official website for the movie describes it in this way:

As tuition rates spiral beyond reach and student loan debt passes $1 trillion (more than credit card debt), IVORY TOWER asks: Is college worth the cost?  From the halls of Harvard, to public colleges in financial crisis, to Silicon Valley, filmmaker Andrew Rossi (PAGE ONE: INSIDE THE NEW YORK TIMES) assembles an urgent portrait of a great American institution at the breaking point.
Through profiles at Arizona State, Cooper Union, and San Jose State —among several others—IVORY TOWER reveals how colleges in the United States, long regarded as leaders in higher education, came to embrace a business model that often promotes expansion over quality learning. But along the way we also find unique programs, from Stanford to the free desert school Deep Springs to the historically black all women’s college Spelman, where the potential for life-changing college experiences endure. Ultimately, IVORY TOWER asks, What price will society pay if higher education cannot revolutionize college as we know it and evolve a sustainable economic model?

The screening will begin a 3:30 pm in the Elliott University Center Auditorium, or those who have seen it elsewhere can come to the small group discussions beginning at 5 pm in the EUC Auditorium Lobby.

One of the key voices appearing on the Ivory Tower film is that of Andrew Delbanco, professor in the Humanities at Columbia University and the author of College: What it Was, Is, and Should Be (Princeton University Press, 2012).  Dr. Delbanco will speak at UNCG at 4 pm on Tuesday, April 14 in the Virginia Dare Room on the series title topic, “What Is College For?”

Delbanco was awarded the 2011 National Humanities Medal by President Barack Obama “for his writing that spans the literature of Melville and Emerson to contemporary issues in higher education.” In 2001, he was elected a Fellow of the American Academy of Arts and Sciences and named by Time Magazine as “America’s Best Social Critic.” In 2003, he was named New York State Scholar of the Year by the New York Council for the Humanities, in 2006, he received the “Great Teacher Award” from the Society of Columbia Graduates, and in 2013 he was elected to membership in the American Philosophical Society.

Melville: His World and Work (2005) was published in the United States by Alfred A. Knopf, in Britain under the Picador imprint, and has been translated into German and Spanish. Melville was a finalist for the Los Angeles Times Book Prize in Biography, appeared on “best books” lists in the Washington Post, Independent (London), and TLS, and was awarded the Lionel Trilling Award by Columbia University.  Other books include The Death of Satan (1995), Required Reading: Why Our American Classics Matter Now (1997), and The Real American Dream (1999), which were named notable books by the editors of The New York Times Book Review, and, most recently, The Abolitionist Imagination (2012).  The Puritan Ordeal (1989) also won the Lionel Trilling Award. He has edited Writing New England (2001), The Portable Abraham Lincoln (1992, 2009), volume two of The Sermons of Ralph Waldo Emerson (with Teresa Toulouse), and, with Alan Heimert, The Puritans in America (1985).

Andrew Delbanco’s essays appear regularly in The New York Review of Books, The New Republic, and other journals, on topics ranging from American literary and religious history to contemporary issues in higher education.

Mr. Delbanco has received fellowships from the Guggenheim Foundation, the American Council of Learned Societies, and the National Endowment for the Humanities, and was a member of the inaugural class of fellows at the New York Public Library Cullman Center for Scholars and Writers.  He is a trustee of the Library of America, and the Teagle Foundation, and trustee emeritus of the National Humanities Center.  He has also served as Vice President of PEN American Center, and as a trustee of the Association of American Colleges and Universities.

Both events are free and open to the public.