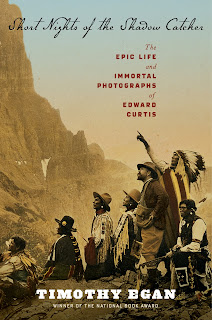 Ray Olson of Booklist says: Before half its 20 volumes were published, The North American Indian was called the most important book since the King James Bible. When the last emerged, its director and primary researcher and author, self-made master photographer Edward Curtis (1868–1952), was old, broke, and dependent on his daughters. Though his great work consumed $2.5 million of J. P. Morgan’s money over the course of three decades, Curtis never took a cent in salary. He lost his business, his property, his marriage, and any control of his great project. But he completed it, preserving a great deal of what we know about Indian cultures, including more than 75 languages, thousands of songs and stories, traditional practices in everything from clothing to religious ritual, and the Indian accounts of such historic milestones as the Battle of the Little Bighorn. Simultaneously, he fixed the image of the North American Indian in a body of work as iconic as any created by any other visual artist in any medium. To accomplish this, he braved the remote, nearly inaccessible places where small tribes clung to their identities, painstakingly won the confidence of wary elders in many larger tribes, and wooed the titans of American wealth to keep going. Ace popular historian Egan makes Curtis’ story frequently suspenseful, always gripping, and monumentally heroic.

Dr. Bob Gatten, who will lead the discussion and provide a 50 minute background lecture on the subject illustrated with many photographs by Curtis, is Emeritus Professor of Biology at UNCG  He served as Head of the Department of Biology and as Associate Dean of the College of Arts and Sciences over a period of 16 years.

The discussions are free and open to the public on a space available basis, with preference given to members of the Friends of the UNCG Libraries who register.

Please contact Barry Miller at barry_miller@uncg.edu or 336-256-0112 at least one week prior to the event to request disability accommodations. In all situations, a good faith effort (up until the time of the event) will be made to provide accommodations.